This may come to a shock to many of you, but I was single for a pretty long time.

I know, I know.  I’ll give you a minute to recover from your shock.  Please — please, don’t start weeping, it’s okay now.  Sometimes things just don’t make sense, right?  We have to accept it, no matter how insane it is.

The thing about being single for a while is that, over time, actions and decisions that were previously unacceptable slowly start to worm their way into our reason.  Good habits fall away like leaves in the autumn, and self-discipline starts to take on a weird, funhouse dimension.  You may still find yourself unable to leave the kitchen without putting all the dishes in the sink or washer, but those socks you left on the counter?  Those don’t need to move for a couple of weeks.  They’re only socks, right?  Who’s going to see them?  Maybe the kitchen counter is exactly the place for those work socks you took off one time while you were waiting for the red wine to breathe.  WHO IS ANYONE TO JUDGE.

So what if you’re pretty sure birds nested in your BBQ over the winter, anyhow?  The fire will pretty much sterilize the area where the eggs hatched.

And if the only thing in your fridge on a Thursday night is a frozen hamburger patty and some old tortillas, well… beef is beef, and bread is bread; who’s to say in these crazy times what really constitutes a hamburger, anyway?

Of course, this is purely internal logic.  It’s not the kind of thinking you would actually disclose to the rest of the world, because — even though there it’s possible everyone out there is exactly as crazy as you are — you simply cannot take the chance.  Even in the depths of the longest isolation, you secretly are aware of which decisions are the ones tinted with madness, and those you can casually disclose over coffee with your co-workers.

So, what I’m trying to say is, I’m really worried about McDonald’s.  Is your sister still single?  I think we might need to fix them up.

Because… what the hell?

In principle, I understand where McDonald’s is coming from with this idea.  The Mac Snack Wrap follows in the overall philosophy that McDonald’s is trying to push into the marketplace — that you can have delicious awful food in small enough portions that it’s not actually bad for you, or at least no worse than anything else you’ll buy from a fast-food restaurant.  Not just scummy crap you’ll buy for your kids after soccer practice, it’s reasonably healthy food that you wouldn’t object to getting for yourself, with all the flavor you remember from when you didn’t care about calories.

It’s sort of a weird stance, but one they’ve been forced to take:  “McDonald’s!  Where incredibly unhealthy food isn’t a big problem, any more.”

So conceptually you might imagine how this would arrive at the point where someone, somewhere, thought it would be a good idea to take the successful “snack wrap” program and back it over McDonald’s existing menu.  It works with grilled chicken, right?  Or those salads that were selling so well?  Why not just extend it to stuff that McDonald’s wants people to actually start buying again?  And who cares if my socks are on the kitchen counter?  Those birds had it coming!

I appreciate the initiative taken by McDonald’s here, to attempt to pare down one of their most traditionally godawful offerings — one so synonymous with junk food that it remains the benchmark against which all other junk food is compared — into a reasonably-portioned snack. But truly, to extend this idea into reality requires so much dream logic that I am stunned it actually happened.  It would require long-standing business people to agree to the following statements:

Of those statements, only a single one is true — and that’s not nearly enough.

Behold the Chicken Big Mac Snack Wrap, so darned new and test-marketed that it doesn’t even get it’s own branded wrapping paper.  It’s roughly large enough to fill a tea saucer, or hold in the palm of an adult’s hand.

Before anyone tells me how I’ve been conditioned by the fast food world to expect gigantic meals, permit me a moment to establish that a) I have seen Super Size Me, but thanks and b) I actually consider this portion size a good thing.  Frankly, good for McDonald’s to be adapting in any way to the idea that not all of their customers want massive junk food overdoses every day — if this helps them to compete in the marketplace, more power to them and fewer heart attacks for the rest of us.  I call that win-win.

However, what I will say is that when you’re introducing a calorie-conscious, reduced-portion version of something called the Big Mac… well, you’re asking people to take a leap.  And it’s got to be worth it.

I’m not sure this is really convincing enough.

The Mac Wrap comes in a steamed tortilla, carefully wrapped around what McDonald’s would love to have you believe are all the core ingredients of the Big Mac:  the beef, cheese, lettuce, pickles and special sauce.  What else is there, really?  And if those respective ingredients are reduced in proportion to almost comically small amounts, who’s to know the difference?  The flavors are still basically the same, but without the guilt of having gulped back an entire Big Mac on your lunch hour.

I am at a loss.  Unwind your carefully-assembled tortilla and gaze upon exactly what your two bucks bought you:  half of a single Big Mac patty, hopelessly slapped on a tiny bed of lettuce and sprinkling of cheese, with only enough special sauce to adhere the contents to the bread.  One might be tempted to spite the restaurant staff for sloppy assembly, were it not for the almost artful arrangement of the pickles — this is clearly the work of someone who is trying their best with the job they were given, and I am willing to accept their briny apology.

Behold, I am stunned:

(Also, covered in cat hair, but that has nothing to do with the situation at hand.)

You may notice that even while I defend the size of the Mac Snack, it is relatively miniscule in comparison to my total body mass.  Therefore it is important to realize that a healthy adult will plough through one of these in fewer bites than it may take to consume, say, a donut or a breath of fresh air.  You have been duly warned. 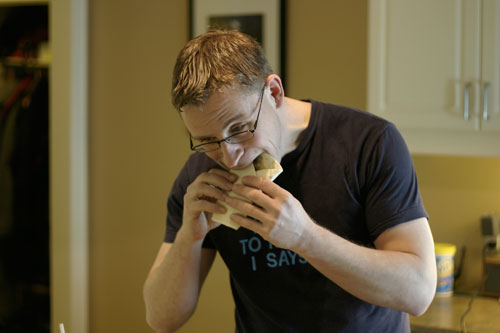 Now, some may say that I have the oral capacity of a python on a diet, but I prefer to think of myself as freakish in the most positive way.  Regardless, one can witness from the scale of the photograph exactly what I’m talking about when I discuss portion size.  There’s nothing wrong with how much McDonald’s is serving me in the way of volume, only with what it actually tastes like once I take a bite out of it.

And, no matter how inhumanly large a bite that may be, it only seems fair that I should expect flavor that — if not entirely like that of a Big Mac — at least approximates it.

But hey, how often is life fair, right?

Instead, welcome to Flavor Country.  You know, if that country were Burkina Faso, or one of the Pacific Island nations destined to sink in the next fifteen years.  Planting your teeth through a recently-steamed tortilla isn’t a bad thing, nor is encountering a Big Mac patty on your way through — it’s just that when those are the only two elements that make it into your first bite, you realize just how very badly the Big Mac relies on the special sauce, pickles and (God help us) even the lettuce to bring the flavor all together.  Until then, it’s just steamed bread meeting microwaved meat.

Mmmm, and what tastes better than steamed, undressed tortillas?  Only re-heated, re-constituted beef!

By the time you actually do hit the pickles and other ingredients, even the most normal-mouthed of humans will start to wonder if they’ve been short-changed, and with good cause.  It’s because you have been, with a fraction of Big Mac sold to you for a considerably larger fraction of the price.  There’s nothing wrong at all with the idea that customers might want only a taste of the sweet, delicious junk food that their metabolism can no longer sustain; however, there are many, many problems with offering a microscopic slice of that flavor for a macrocosmic fraction of the price.

Even if you are not, as I am, of Scottish heritage and therefore highly sensitive to the price of everything, you are unlikely to find the Mac Snack Wrap to be anything but a disappointment.  As a bachelor isolated in my townhouse with only tortilla bread and frozen patties, this might be an acceptable meal, but only because I can pretend that no-one on earth but me knows I am enjoying it.  On the other hand, there’s no way that a restaurant chain should get away with the same kind of thinking.

THIS SNACK SUCKS, McDonald’s.  Canada appreciates your efforts, but really — give us a teensy bit more credit, if you wouldn’t mind.