Food for Sickos of the Illness Kind

I finally went to see the doctor today.  He wrote me out a prescription for four different pharmaceuticals and told me to stay home and drink plenty of liquids.

“Stay home??!”  I asked him with only a hint of panic.  “Like, what about if I only go to work but I promise not to stay late and– *hack hackCOUGH snort hack*”

“You’re….you’re really contagious. Is your mask-? Gah, cover up your nose.  No, just up a little….just…okay, you’re going to have to do it yourself because I’m not touching you.  And no, obviously you can’t go to work for a while.”

I walked out of his office with my surgical masked head hanging low.

So I’m trying not to infect people right now, which means no retail therapy, no licking public telephones and then replacing the handsets with a smirk, and no sneezing merrily in the air and chirping, “God bless me!” to the horrified onlookers.  At least not for the next few days.

Lying here all holed up and feeling sorry for myself, it just seemed like a good time to go through some of my favorite recipes for sickos…of the illness kind. For all the other sickos, well, you can have the rest of the internet.

Chicken soup for sickos is a total given, but what about the vegetarians?  When a vegan friend of Mike’s asked us to craft a no-chicken soup with the flavors of home, this is what we came up with.  Just don’t forget the gratuitous salt and goldfish crackers. 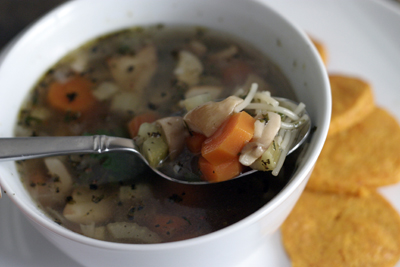 All the scariest nightmare vegetables from your childhood, combined in one bowl.  If there’s one thing that the Scandinavians excel at, other than pathos, it would be taking simple, rustic ingredients and letting the natural flavors shine through without any frivolous fuss and bother……so I added a few frills with a pickled beet swirl.  Take THAT, Sweden.

Ever had those times when you’ve been languishing on the couch for days on end and all you have in the kitchen is a half a loaf of stale bread and a can of diced tomatoes?  Hey, good news!  We have a soup for that.  Just be sure to con some poor sap into bringing you fresh basil, because seriously – we know you’re not leaving the house with hair that looks like that. 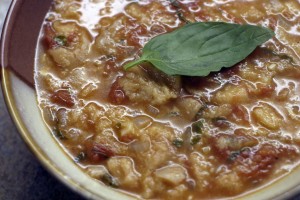 When you’re craving something hearty but easy on the tums, this lighter, brighter version of white chili does the job.  You can keep it mild or spice it up to burn out the bacteria, but either way this chicken and ground turkey stew is easy on the body and the pocketbook.  Also?  “Turcken”.  That makes me giggle. 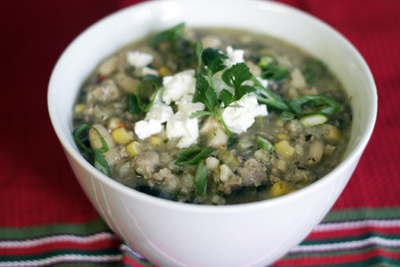 I don’t expect you to lurch over to the dry goods cabinet and pull out the farro when your forehead is getting licked by Be’elzebub.  I do expect you to pull up this recipe and leave it open on your computer screen until somebody else makes it for you.  This is hearty vegetarian comfort food with just the right balance of vitamins and nutrients to get you back on your feet in good time.

There’s something intrinsically comforting about a juicy, crispy skinned roast chicken.  This bird, redolent with garlic and lemon, takes a minimum of effort and allows you an hour of self-pitying couch time as it roasts.  I do enjoy food that’s built around my various melodramas and Coronation Street. 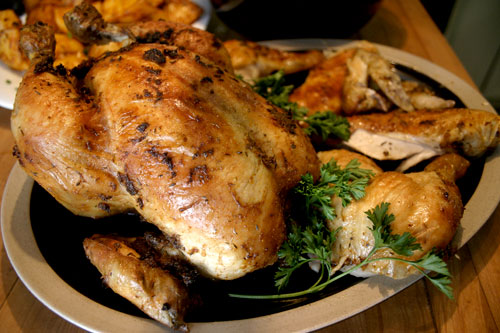 I would be far more receptive to folk medicine if all of the recommendations were more along these lines of drinking butter and chasing a flu with warm rum, rather than making a plaster out of horse manure and sleeping with an onion on your ear. 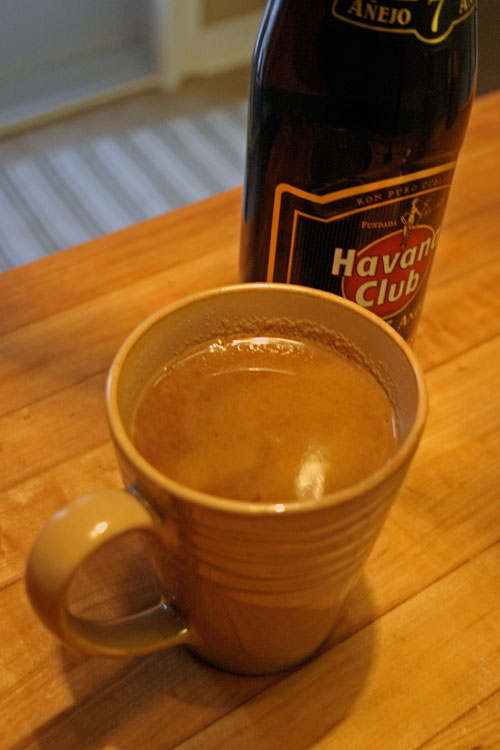 Mary Poppins is widely known for saying that a spoon full of sugar helps the medicine goes down, but I prefer to chase my Buckleys with Sour Patch Kids. With this cocktail, Mike has managed to concoct a tonic that will soothe the pains of the congested and coughing, ease discomfort and promote warm feelings of contentment that will ultimately lead to unconsciousness.  Because…sometimes that just helps. 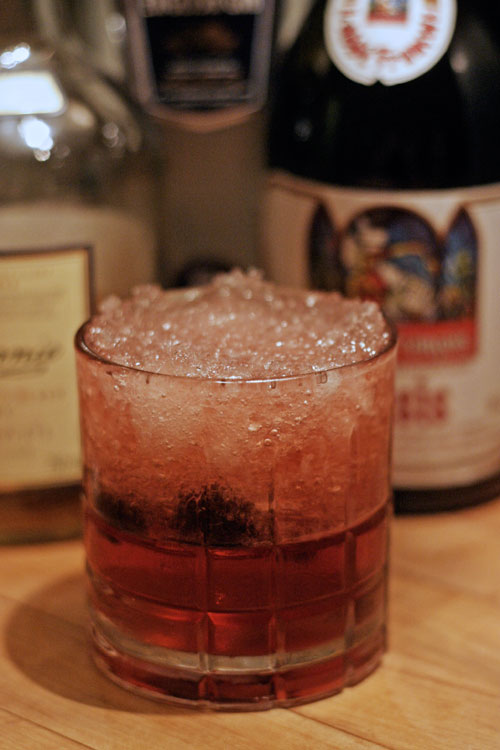 And speaking of cocktails, I suppose it’s time for the shameless pandering that you’re coming to expect by now.  But hey, voting ends the day after tomorrow and how else will we know if we should keep the cocktails coming?* If you haven’t checked out the Foodbuzz First Annual Blogger Awards, you can go here to cast your ballot for all sorts of great food bloggers in a multitude of categories.  And if you happened to mention that we’re the bloggers that you would most want to make you a cocktail, well, we wouldn’t mind….