What Not To Drink This Week – Jack Daniels and Cola Edition

This drink is some bullshit, right here. 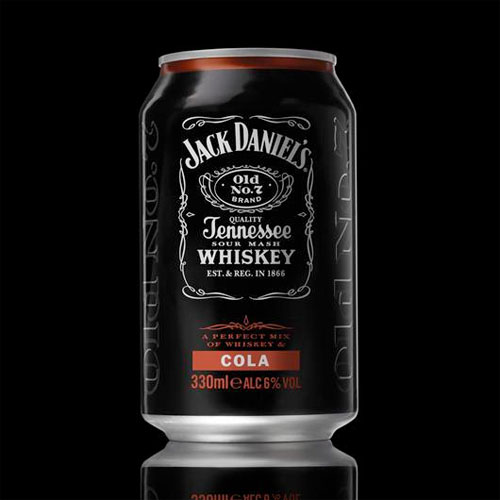 This is a Jack Daniel’s and Cola pre-mixed beverage, served in a 330mL (12 oz) can at 6% ABV.  It epitomizes everything that is wrong, evil, wretched and stupid about the pre-mixed cooler industry.  I hate it utterly.  You cannot imagine that this will be, in any way, a positive review.

Before I really launch into it, though, I want to be clear about something:  I am not one of those purists who insists that every drink be hand-mixed, blended with antique methods that hearken back to the days of Jerry Thomas.  I won’t scowl at you if you refrigerate your vodka, I won’t judge you if you DON’T refrigerate your vodka, and I won’t turn up my nose if someone offers me a Bacardi Breezer.  Booze is booze, and sometimes booze that tastes like melted popcicles is exactly what the occasion calls for.

But good God, there are limits.  When Smirnoff Tuscan Lemonade (with Limoncello!) tries to make you believe that chemical lemon-water with a dash of vodka is in any way authentic middle-Italian fare, they are pandering to a trend and lying to you.  It’s dishonest, and as I may have said once in a while on this site before, boy howdy is it a little bit insulting.

In fact, I thought it might very well be the most insulting entry into the already-flooded and long-execrable market of pre-mixed cocktails, but apparently I had no idea.  Apparently, I did not realize how far down we had already sunk, because — apparently — I had never before encountered Jack Daniel’s and Cola prepared beverages.

Jesus, this is… it’s just devastating.

Go on, go and Google the term “Jack and Coke“, and see what you get.  It’s going to be pretty consistent, and it’s going to look a whole lot like this:

And THAT’S IT.  The only thing missing is the total prep time, which is “thirty seconds or you have SERIOUS PROBLEMS.”  There is nobody out there, in the world, who is holding their hands out helplessly before them and begging anyone who will listen to help them understand what’s in a Jack and Coke.  There is no ambiguity to the recipe, no possible linguistic gap between sign and signifier that could lose even the most novice of drinkers — Christ, even the proportions aren’t that important.  As long as there’s whiskey and cola in the glass, you’ve managed to achieve a Jack and Coke.

It isn’t complicated.  So who, in what possible state of mind, thought that this was a good idea? 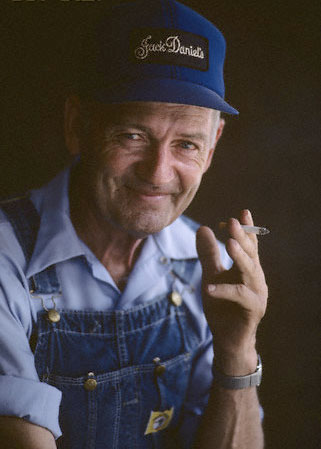 Oh, why hello there!  I’m Paul Varga, Chairman and CEO of Brown-Forman Corporation, the mega-parent corporation that owns Jack Daniel’s, as well as a whole load of other liquor brands.  It’d probably bother the holy hell out of you to know exactly which ones, so I won’t go into that right now — but dog-gonnit, if there’s one thing I can’t stand it’s an unhappy customer, so I would like to answer any questions you have about our fine, fine products.

(puffs cigarette, blows the smoke at you)

Now, I’ve led a hard life down here in Tennessee, buyin’ up liquor corporations and makin’ billions of dollars and whatnot, so you may say that I’m not tuned into what you call your modern sensibilities.  That’s a hard thing for a man to admit, wearin’ these overalls as I am, but that’s what I’m willin’ to do right here and now — I’m willin’ to say that I don’t understand you god-damned young people.

Why on earth anyone would spend five minutes painfully textin’ out a sentence when they coulda just phoned a body and gotten it over with, I couldn’t tell you.  Why in the holy hootin’ hell compact discs aren’t good enough for anyone, I don’t know — who listens to ten thousand songs anyway?  I can’t say I’ve heard that much music in my long, successful and fulfilling life, let alone what these kids cram on their iPhones and whatnot.

(puffs cigarette again, languidly spits on the ground, very close to your foot)

But while you can bet your last dollar on the fact that I’ll never figure out you weird damn kids, there is one thing I know I can count on:  laziness.  It is down right inspirin’ to know just how much a man’s fortune can be made off of the raw, cavortin’ slothfulness of his fellow man.  The product developin’ folks laughed at me when I said we oughta mass produce Jack ‘n’ Cokes, because there’d be enough chubby fraternity boys out there who’d run out of breath tryin’ to mix their own.

Ain’t got no vision, those folks.  No sense of what’s important to our customers, that’s what I figure.  ‘Cause while I sure as shit can’t see the appeal of screamin’ at retarded strangers over the Xbox or whatever, I know that a man who won’t get out of his chair out of fear of losin’ a video game is also a man who doesn’t have time to mix his own drinks.  And he’s willin’ to pay a premium for it!

(flicks cigarette over his shoulder, stares very intently right into your eyes)

‘Course, since someone of that kinda industry — a fella for whom pourin’ both liquor and coke into a glass is more effort than he can bear — ain’t likely to know what Jack and Coke tastes like, we gotta educate him.  So that’s why we did our best to downplay the “Cola” and really juice up the “Jack”, if you follow my reasonin’.

Sure!  That can may say 6% alcohol, but that don’t mean it can’t be 110% flavor!  The burning, acrid, charred caramel flavor of Jack Daniel’s through and through!  The kind of Jack Flavor that helps lazy, brand-obsessed males with just enough disposable income to know what they’re drinkin’, with every sip and swallow.

Why, it’s less Jack and Cola and more just pre-diluted Jack in sweetened water — ’cause if you wanted to taste the Coke, why, you’d get up off your fat ass and make your own, wouldn’t you?

Yes indeed, they would.

Jack Daniel’s and Cola pre-mixed beverages have actually been around for a staggering amount of time, but only recently did I actually encounter them in quantity.  It’s possible to forgive true devotees of the brand — as legion and vocally critical of this site as they are — but how on earth can we explain why anyone else would buy this?

But most importantly, it is produced on the pure assumption that you can absolutely do no better — and you CAN.  Indeed, you must, or even more insulting pre-mixed drinks will await us in the future.  It is against dreadful concepts like this one that we must circle our wagons, or face the inevitable pre-mixed rum-and-Sprite drinks to come.

We can do better.