It seems like aeons ago that France was officially ousted from the FIFA World Cup due to poor performance, but their poor behavior will continue to be a mealy subject for bar room chatter and spit-shined gossip for months –or years– to come.  Like a moth to a flame, I’ve always been inexorably drawn to controversy, even if my ‘opinions’, weak though they might be, are little more than an irrational need to defend the (generally corrupt) underdog.  However, what we saw from France in the months leading up to the World Cup and again during the games, really leaves little room for defense and I’ve been utterly captivated by the team’s zealous plummet from the grace of FIFA 2006.

If you have been watching the drama unfold during the FIFA World Cup 2010, I can almost guarantee that you’re likely a far better resource than I am. After all, for the last month I’ve been much more concerned with what the various countries are eating rather than how they play, and yet every time that I’ve heard “France…..” from a TV journalist, or seen a headline in the newspaper, I’ve perked right up and been transfixed by the car crash of their recent performance.  Let’s just take a look at a few of the highlights, shall we?

1. After a close game in Dublin, France took the field against Ireland to determine the qualifiers for the 2010 FIFA World Cup. During that game, Thierry Henry handled the ball not once but twice to keep it from going out of play but was not penalized…and then France scored a goal.  Although the Irish called for a replay of the game. FIFA let it slide and France went to the World Cup by a hair’s breath and a monkey’s chance. So, basically, France slipped through amidst international outrage because of an illegal play.  Huh.

2.  After a depressingly boring game against Uruguay (final score 0-0), France faced off against Mexico.  The team was struggling and eventually lost.  However, during half time, the striker Nicolas Anelka launched a rather colorful tirade against Raymond Domenech, France’s Manager.  As a result of this rather unprofessional behavior, Anelka was sent home from the games and made a sophomoric move to retire from football as a whole…which might not be such a bad thing…..

3. France’s captain, Patrice Evra, was so affronted by the media coverage of this event,  which he  believed was leaked to the media by their fitness trainer, Robert Duverne, that he allegedly called him a traitor and it resulted in an infantile match of fisticuffs which was broken up by Domenech, who needed to physically restrain Duverne.  Domenech had clearly lost any controlling presence for the team.

4. The team director, Jean-Louis Valentin was so disgusted by the impending collapse of the team that he stormed off to his car, threw his badge on the ground, and promptly buggered off…in the middle of one of the world’s biggest sporting events.  Immediately following his sudden flounce-n-flee, he decided to leave the federation once and for all because he was “sickened and disgusted”, and for good cause.

….Can you see now why I was so absolutely intrigued?

5.  As a national team representing your country with pride and valor, what do you do when your striker has received the deep-six from the rest of FIFA? Well, obviously, you bitterly slink off to your tour bus and flatly refuse to play anymore. Because, in the absence of trees to chain oneself to, a player boycott just seemed like the most logical approach….in the middle of one of the world’s biggest sporting events.

6. After a bit of scolding, the French team finally edges carefully off their bus to be trounced by South Africa with a 2-1 defeat, as they finished at the very bottom of the Round Robin (group ‘A’).  Raymond Domenech, France’s Manager, managed the situation with his customary panache and professionalism by emphatically refusing to shake hands with the other team’s Manager, Carlos Alberto Parreira.  Way to keep it classy, France.

We have mutiny! We have disgrace and barroom type brawls! We have international outrage! Really, if all sporting events were this exciting, I might just don a helmet once in a while and pick up a stick…or a ball….or whatever it is that sporty people do.  In the meantime, however, I’ll pay homage to the French team for their grossly immature and contemptible behaviour (IN THE MIDDLE OF ONE OF THE WORLD’S BIGGEST SPORTING EVENTS), with a dish that seems appropriate:  lame duck and sour grapes.

To be honest though, this is kind of an awesome entree.  I don’t really think that France deserves this kind of culinary kudos right now, bearing in mind that succulent duck with a sweet and savory slow roasted grape reduction is not much of a punishment, but I’ve never been one to hold grudges.  After all, for all of the entertainment that they’ve provided us with over the last couple of weeks, a mindlessly easy but insanely elegant dinner is the least that I could do.

Oh, and by the way — if your relationship has seemed a bit ho-hum lately, it won’t be after you make this for dinner….

* Crème de Cassis is a sweet black currant liqueur from the Bordeaux region of France. Chambord is an excellent substitute.

** No need to be fussy about the butter. Salted butter is fine and you can adjust the seasoning before the dish is served.

Wash the grapes and separate them from the vine.  Put the grapes in a small baking dish (I find that a loaf pan works perfectly, but you could spread them in a single layer in an 8×8 for faster cooking).  Peel the onion and cut it in half before slicing into thin half moons about 1/8″ thick. Smash and peel the garlic but leave the cloves relatively whole.  Drizzle the honey over top and pour in the Crème de Cassis.  Cut the butter into small chunks and add them along with the dried herbs.

I’m calling this sauce a “gastrique”, but it’s really more of a lazybones version, as is my wont.  Traditional gastrique is a thick reduction made from caramelizing sugar, tossing fruit in the bitter sweet deliciousness, and then thinning it with vinegar.  You could compare it to the Italian agrodolce, a luscious sweet and sour sauce often served over game meat. But do you really want to try your hand at caramelizing sugar an hour before your date is set to arrive and when you haven’t even done your hair? I thought not. Hence, the lazybones version was born.

Tuck the dish into your oven to roast for 45-60 minutes.  Give them a stir about halfway through to make sure that everything is cooking evenly.

In the mean time, pat your duck breasts very dry with paper towel.  If there is any silverskin or membrane on the meaty side of the breast, remove it.  Using a sharp knife, score the fat of the duck breasts in slits about 1/4″ apart, being careful not to cut all the way into the flesh of the breast.  Season liberally with salt and pepper on both sides, and set this aside to continue air drying until you’re ready to cook the breasts.

Set a large, heavy skillet over medium high heat until it is screaming hot.  Gently place the duck breasts into the pan skin side down and let them sizzle and sear for 6-8 minutes or until the fat has rendered and the skin is crispy and browned.  Duck breasts really do put out quite a bit of fat, so be sure to swirl the pan around as you go. If you have particularly voluptuous breasts and the fat in the pan has risen more than 1/8″ deep in the pan (which is possible, kids) drain a bit of it off and keep cooking.

The muscle of the breast will still be quite red, so flip the breasts over and sear them skin side up for about 2 minutes in the hot, fatty pan.

If you have been reading this site for a while, it will come as no surprise to you that I like my duck breasts medium rare, and if they’re cooked any more than medium you’ll hear several lugubrious sighs as I push things around on my plate and grumble to no one in particular. When duck is between medium rare and medium I find the flavor to be at it’s prime and the texture is as meaty as a cut of lean beef.  I feel no qualms about calling duck “pond steak”, and I tend to treat the meat similarly to beef.  However, if you prefer your duck to be less pink, tuck the pan into the oven beside the grapes and let it cook for an additional 5-10 minutes or until it reaches your desired doneness.

When your duck is cooked, set the breasts aside to rest, tented under tinfoil, for 10 minutes as you finish the sauce.  Pour most of the remaining fat from the pan and set it aside to make something delicious in the immediate future (duck fat fries are pure decadence) but do not wipe out the pan. 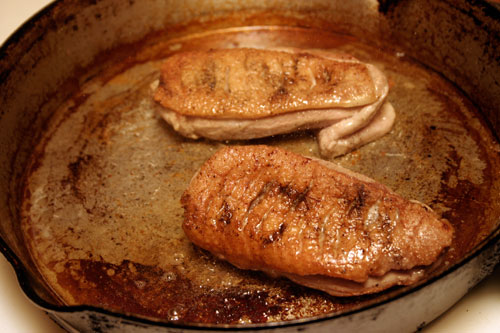 Now then, back to the grapes.  When the grapes are sufficiently roasted the onions will be soft and dark, the garlic will have pretty much dissolved into the sauce, and the grapes will be puffed and bursting in a pool of delicious juice. That’s perfect.  Stir in the Dijon mustard and red wine vinegar.

Pour the mixture into the slick pan that used to hold your duck breasts and their rendered fat which was poured off.  Over medium high heat, cook this mixture until it reduces somewhat to the consistency of a loose chutney, which will take 5-7 minutes.  When you stir and can see the bottom of the pan for about 5 seconds before it fills in, the sauce is ready.

Slice the duck breasts across the grain and serve with half of the roasted grape sauce spooned over each one.  For side dishes, we made a buttery potato galette, roasted asparagus with tarragon, and some crispy thin slices of fennel.

Meaty, gamey duck pairs perfectly with sweet and tangy sauces.  In this case, the grape gastrique is savory and balanced with a touch of acidity and a pleasing sweetness, effortlessly elegant and an excellent match.

If you happen to be an infamous French football star, you won’t really need the help. However, for the rest of us mere mortals, I should let you know that this falls under the category of Food To Get You Laid. No kidding.  I got lucky myself about 3 minutes after the cutlery was laid across two spotless plates, and I daresay that it’s only reasonable for you to expect the same.  When you make a meal this sensual and luscious, diggins come as naturally as an after dinner mint. Consider that carefully, and…..you’re welcome.