What to drink this week: Caramilk Cream Cooler

Look, there are a lot of things out there that I don’t like.  So, so many of them.  I once upon a time had an idea that I would start a website dedicated entirely to writing about the things that I despise, that provoked in me seething outrage and resentment, that prompted such fury that I could no longer hold my spite and awfulness inside any more.  I bought the domain name, I set up the blog, and on the first day that I was ready to hit publish, I realized that the entire internet had beaten me to it.

So, while I do have occasional lapses (that in fairness I feel are often public service announcements), I try my best to accentuate the positive and eliminate the negative… unless it’s really fun.

For example, there are few things for which I have less enthusiasm than cream liqueurs.  I find them limited (oh, I can drink them straight OR in coffee?  AMAZING!), and for the most part they’re kind of heavy and awful.  I know there’s been a big marketing push lately to re-position them as hip and clever, with bland douchebags impressing model-quality women with the versatility of Bailey’s at fabulous loft parties, implying that the rest of us could be tapping the same amount of strange if only we’d be more of a douchebag and drink Irish Creme.

Yeah.  “Baileys:  Go for it, the smile was implied consent.”

This sort of thing gets up my nose for a lot of reasons, not least of which is that you can only have about two glasses of anything dairy before your throat shuts itself down and your guts knot up.  There’s another ad in this series that’s got a dude and a woman playing sexy charades, as she tries to get him to order her a Bailey’s while they’re at a nightclub… Never mind the dude’s gay panic at the end of the ad (I HAVE NO OPTION BUT TO LOVINGLY KISS HIM!) — just ask yourself, what woman chooses a stomach full of booze and milk before she hits the dance floor?

So, Baileys is boring and limited, and so is their advertising approach to tap into my young, hip demographic that sits at home drinking in front of the TV.  This has done nothing at all to improve my feelings on cream-based beverages of any variety, and I was rather thinking that nothing would come along that could.

But then!  Along comes that most surprising of things:  The Cadbury Caramilk Cream Cooler. 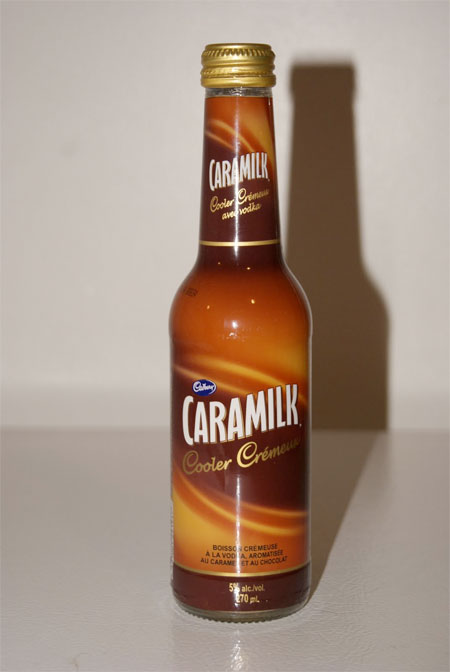 I had seen that there was a Caramilk Cream liqueur out there more than a year ago, but I had dismissed it as probably disgusting without too much thought.  Caramilk bars are fabulous and amazing, and the miniature versions you can get at Hallowe’en are much sought after in the bargain bins on November 1st and onwards.  It was too much for me to bear that someone would attempt to sully that nearly overwhelming caramel-chocolate sweetness in the same category a Baileys, Godiva or Starbucks.

But when these showed up on the shelf, it felt at least like an opportunity to try something different — namely, something different that Tina could drink and share with her friends, and that I could try and thereafter turn my nose up at with some authority.  So damn, wasn’t it a problem for me to find out that they’re actually very enjoyable.

Caramilk Coolers are bundled into a four-pack, running about thirteen bucks at our local Liquor Control Board outpost.  That doesn’t make them cheap, and in general they run in that top-end of the pre-mixed coolers-to-go.  Finding them is an interesting task too, as their status as a cream liqueur seems to confuse our local retailers a wee bit.  These may be anywhere between the casual summer drinks, the one-serve mixers like Woodys or Mike’s Hard, or even just sort of on an end-cap near the liqueur section.

Once you do manage to locate some, you’ll notice that these run at 5% ABV, which is about the same as anything out of the beer section, and lighter than most of the other vodka coolers on the shelf.  And this IS a vodka cocktail, rather than the whiskey that gives Baileys its punch.  Maybe I’m imagining things, but that may well be why it’s so good — the alcohol doesn’t contribute anything much at all to the flavor of this, leaving the actual taste of the drink to do the job.

The result is like having a glass of chocolate milk with a little shot of caramel stirred into it, over ice.  It’s still dairy for sure, but light and sweet and addictive in that insidious, gut-wrecking way that chocolate milk has about it… but now with a lightly alcoholic kick.  This is not at all a skinny drink, nor is it really one that you want to have out on the porch during a really hot day.

But for all that, it’s definitely a nice departure from the usual single-serving fizzy-berry-or-citrus-vodka-drinks, and is well worth trying if for nothing other than the pleasant surprise.

There are some times in life when you really want nothing more than a great big class of cold chocolate milk, because every organ in your body is telling you that it’s time for calcium laced with sugar.  What Caramilk Cream Coolers do is give you a solution to that craving, add in caramel and alcohol ALL IN ONE LITTLE BOTTLE, and then give you THREE MORE just in case.

THAT is how you sell cream liqueurs, my friends.  That is how it’s done.

Tags baileys, caramilk, cream, liqueur, what to drink this week