Hello, folks!  Here is the last of the antipasto that I made the other night.  Please note that although these are delicious, they are NOT for the faint of heart.  If you don’t enjoy spicy food, this is not the recipe for you.

These poppers are rather unlike the smoky Mexicali deliciousness of the Bacon Wrapped Jalapeno Poppers that I showed you before.  Despite the fact that the cherry peppers have had their seeds and veins removed, and they have been steamed until they’re tender to mellow out the heat, and they’re stuffed with creamy Brie and tender Prosciutto, these babies still pack one heck of a punch.  The thing is, if you can handle a bit of heat than that isn’t at all a deterrent because the soft piquant peppers combine so well with the gooey, nutty cheese and the salty chewiness of the meat – I was hooked at first bite.

The other thing about peppers is that you never REALLY know how hot they’re going to be until you eat them.  I made a batch of stuffed peppers a few months back for an antipasto buffet that we brought to Mike’s parent’s house.  Those ones were stuffed with salami (spicy salami, no less!) and a cream cheese/feta mixture.  I won’t lie to you and tell you that they weren’t at all spicy, because they were, but those babies were nothing compared to these.  I’m telling you, the proof is in the pepper.

Don’t mind the garlic, that’s not really in there.  Just pretend that you don’t see it.  Like I said in the first post, I was doing Usain Bolt style prep and I either forgot to move it out of the way, or I had some mysterious intentions that I don’t remember about incorporating garlic as an ingredient.  Although it does look lovely there, and now I’m wishing that I had put some garlic in somewhere…..oh well, maybe you can do that?

Wash and dry your peppers.  Slice off the tops, and scoop out the seeds and veins.  ALL OF THEM.  You’ll appreciate this later.  I used my melon baller to do this because it was just the right size and I never actually make any melon balls so it sits unused most of the time.  Even the lowly melon baller needs attention, once in a while.  A great tool would be a sharp old vegetable peeler to really get into the nooks and crannies. 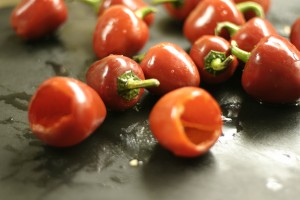 Nestle the peppers cut side up in a steamer basket.  You’re wondering about the potato, aren’t you?  Well, you want them to be snug or they’ll fall over and get all wilty when they steam.  The potato is doing what potatoes do best, and acting as a filler.

Steam for about 20 minutes until they are very soft but still keep their shape.  When they’re done, let them cool completely before going on to the next step.  I left this in the fridge over night because I had officially done as much prep as I had time for that day. 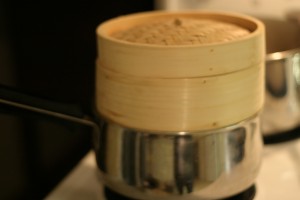 When you feel up to it and the peppers are cooled, let the assembly begin!! Preheat the oven to 400.  If any moisture collected inside the peppers, please drain this out before attempting to stuff.  Cut about 1/3 of a piece of prosciutto for the small peppers, or 1/2 piece for the large.  Use that to line the inside of the pepper, and stuff the rest of it into the bottom all helter skelter.  Nobody will mind!  As for the Brie, cut relatively small chunks and really fill the pepper right up.

Here they are assembled, and again with my bad flash photography.  Sorry…..these are in an oven proof dish, and they are ready to go into the 400 degree oven for about 10 – 15 minutes, or until the cheesy is fully melty, gooey, and delicious. 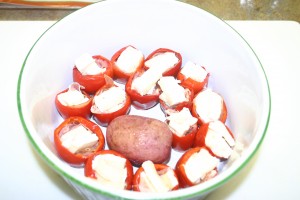 Serve on a platter with some fresh mixed greens in a vinaigrette on the side, and you’re done!

The peppers are very soft and melty, so make sure that your guests have slices of fresh baguette to eat them on.  That will also temper the heat, somewhat.  Speaking of heat, there were only 3 left in the fridge when Mike got home yesterday and he polished these off (stone cold!) and didn’t see what the big deal was about “spiciness” and “burning mouths”….but Mike is an exception.

If you’re into antipasto, why not try these with the Marinated Olives with Lemon and Oregano  or Herb Marinated Bocconcini Balls (shown below)? 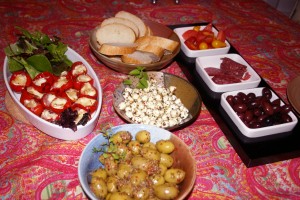 As you’re getting ready to pop the first melty, peppery, salty and meaty bite into your mouth, consider playing Great Balls of Fire – but the Tom Jones version, just because. 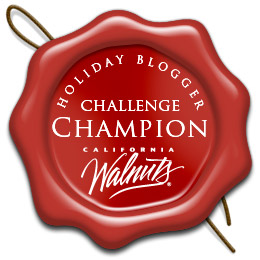