Satchels Of Turkey, Cranberry And Brie

I learned something very interesting about Mike last week.  You see, I never liked turkey when I was growing up.  In fact, it would be a fair assumption to say that I loathed and despised turkey with a fiery burning abhorrence. I used to dread Thanksgiving and Christmas, knowing that the only redemption for this desiccated excuse for poultry would be by smothering the microscopic shard of meat in gravy and cranberry sauce.

“Oh,” Mike said one day, “but you haven’t tried my mother’s turkey”.  We had only been dating for a few months at the time, and we were still in that smitten-kitten stage of romance, so I started to get anxious and agitated thinking about how I could avoid having to eat turkey without hurting his feelings or dishonoring his family.  Dishonoring?  Did I honestly just say that?  I think that this flu I have has officially started to addle my brain.  Anyway, back to turkey-talk.  With great trepidation I carved off a tiny triangle of meat (what’s this?  It cuts! Like, clean cuts!  I thought turkey was supposed to shred…) and grudgingly put it in my mouth.  And…and it was GOOD.  I mean, I LIKED it.  I LIKED TURKEY!  I ATE TURKEY AND I’D DO IT AGAIN!

Although my Dad is one of the greatest and most creative cooks that I know, I have to say it:  Mike’s Mom makes the best turkey.  Ever.  Period, and game over.

So fast forward to the Christmas season of 2008, when Mike and I waddle out of his parent’s house with (the standard amount) about a week’s worth of leftovers.  This is nothing to sniff at, and we were already imagining the delicious turkey sandwiches and pot-pies that we would make with our haul.  However, when we started unloading into the fridge, Mike wailed out (with perfect B-movie intonations), “OH NOOOOOOOOOO!!!!!”

Mike:  “No, it’s NOT.  It’s the part that you only eat when you’re out of white meat or you have to be polite.”

…and with that he pushed the bag to the side.

I was absolutely flummoxed.  Here we have a self-proclaimed turkey lover, who apparently has an aversion to dark meat (my favorite), and I find this out exactly at the time when we’ve returned home with what looks like the leg of a Gigantoraptor.  This was to become even more alarming when I realized that there was no feasible way for me to eat all of that turkey on my own, and yet there was also no way that I was going to dispose of this tasty meat unless it was down a gullet.  Specifically, our mutual gullets.

And once more, puff pastry comes in to save the day.  You see, people will eat things that they would otherwise shun and ward off with the evil eye, as long as you wrap it up in puff pastry first.  True story.  First they’ll try it, then they’ll like it, and finally they’ll grudgingly admit that maybe something like dark meat isn’t so bad after all.  And then they’ll eat another one.

These little puffs taste like Christmas dinner was condensed into a wee little parcel of pastry-clad joy.  Each two bite glory has all of the scent, texture and taste of a holiday meal, but without the fuss.  Turkey, cranberry, sage and thyme, oh yeah.  When you add in the creamy melted Brie, the flavor and texture almost starts to counterfeit a nice fatty turkey gravy.  Because Mike and I like to entertain on a regular basis, I made them smaller than I normally would so that I could do up a whack-ton of these delightful nibbles.  They’ll come out at various cocktail parties or gatherings over the next month or two, or get popped into the oven on those emergency, “is that the doorbell?” days.

Finally, my favorite part:  it’s easy enough to think of a myriad of uses for leftover turkey meat, but how many things do you REALLY do with leftover cranberry sauce?  I’ve tried making pudding-cakes, ice cream sauces, smoothies, and cranberry “Linzer” tortes, but sometimes it’s just nice to have a good, honest, cheap-trick way to use up your leftovers.

This is not a set-in-stone recipe, it’s really just a guideline that you can adapt according to your taste.

Satchels Of Turkey, Cranberry And Brie

Makes 36 – 64 small bites, depending on your choice of size

Drain as much liquid as you can off of the cranberry sauce so that you have mostly cooked cranberries left. The sauce will make the pastry goopy and harder to work with.

Combine the cranberries with the finely diced turkey and sprinkle on thyme sage, salt and pepper.  I used about 2 tsp of dried thyme and 1 tsp of dried sage.

Cut the swiss cheese into a small dice, about 1/8″.  Add this to the turkey mixture.

The Brie should be cut into larger chunks, about 1/2″ square that’s 1/4″ tall.  Or, really, however big you like.  I had a half wedge of herbed Brie and a half wedge of triple cream Brie in the fridge, and they both worked marvellously.

On a lightly floured surface, roll the first of the four puff pastry pieces into  a large square, about 11 -12″ in length and width.  It will be thin, roughly 1/8″. Cut this vertically into 4 strips, and then do the same horizontally to make 16 squares.  This will yield 64 small satchels (16 pieces per each of 4 portions of puff pastry).

On each square of puff pastry put down 1 tbsp of turkey/cranberry/Swiss filling and top it with a wedge of the Brie.

If you want a larger satchel, and frankly just don’t feel like plumping and sealing 64 little appetizers, cut the dough into 3×3 and increase the amount of turkey filling and Brie per square.  This will yield 36 larger satchels (9 pieces per each of 4 portions of puff pastry).

You’ll get a feel for how much filling you can put into each square.  If you underfill them then you end up with a satchel of mostly puff pastry when they’re cooked.  If you overfill them then they’re pretty hard to seal.  The amount below is what *I* would consider to be the optimal filling amount. 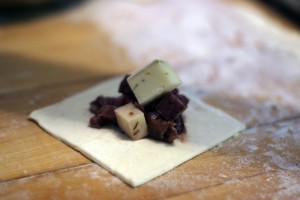 Bring two of the opposite corners together to meet in the middle, and gently pinch them at the top.  Take one of the remaining corners and bring this to the center as well, pressing firmly along both seams to seal it.  Repeat with the last corner, and you have a little square parcel with a raised ‘X’ seam on top.

Lay the completed parcels onto a baking sheet lined with wax or parchment paper as you do the rest.  Storebought puff pastry is delightfully easy to work with as long as you keep it chilled, so whatever you aren’t rolling immediately should be kept in the fridge as you go.

When everything is sealed and stuffed, put the whole jin bang show into the freezer.  As soon as the satchels are frozen you can pack them, as single layers, into freezer bags.

To cook the wee satchels, preheat your oven to 400F.  Line your baking sheet(s) with parchment paper and spread the satchels at least 1-2″ apart to allow them room to swell and puff out.  There should be no more than 12 satchels on a regular sized baking sheet.

Cook the parcels in the middle of your oven for 15-20 minutes.  They’re done when the entire top is flaky, golden and puffed out.  The seams will have separated slightly and allowed the cranberries and cheese to swell and bubble up in the sexiest way possible.  Because yes, my name is Tina, and I think that puff pastry is sexy as hell.

Ah, turkey dinner in a bite sized appetizer portion.  Leftovers can really be re-purposed into the most delightful things, can’t they?  And now I’m prepared for the next brood of unexpected visitors that just happen to stop by.

Do you have a favorite way of using up leftover turkey and cranberry sauce?  If so, please share!!! We’re game for trying new things, and Easter is only months away…..