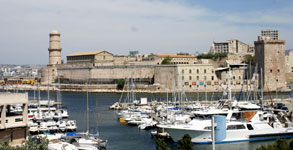 Before we left on vacation, I was chatting with my friend Maja on the phone and talking about our upcoming itinerary.  I told her that after Paris and Lyon we would be heading south to the seaside city of Marseille.  “OH NOOOOOO!!!!”  She wailed.  “Oh Tina, NO!  NOT Marseille!”  I’m fairly certain that I heard her shudder through the phone line.  “Marseille is like….it’s like….the stinky armpit of France!  Why would you possibly want to go there?!”

I started waxing poetic about the warm Mediterranean climate, pulsing streets, briny air and seafood caught mere minutes ago which are at your fingertips.  The history, the smell – I even invoked my favorite line, which I fully admit to having read in a travel book (and which was also the main reason I was so fixated on going to Marseille):  the seething, souk like markets!  And then there was the –

“No.”  She cut me off.  “It’s a dirty old port town.  It’s full of whores and criminals.  The stink of fish isn’t coming from the harbor.”   She never was one to mince her words, that girl.  “But then again, I mean, it’s your trip…..if you wanna go wallow in the filth of Marseille, I don’t mean to discourage you…..maybe it’s, uh, changed.”

Within an hour of our arrival in Marseille, there was a film of dust and grime in every seam of my purse, every crease in my clothing, and every wrinkle on my face.  We trudged up hill to our hotel and I kept looking around, hoping that it was going to get better.  Maybe when we see the old port?  That will be pretty, right?  Or the beaches!  We’ll get a sense of the true beauty of Marseille on the beaches.  And hey, I love seafood, and this is the place to get it.  Oh, or Le Panier,  Marseille’s cultural artist hub full of fetching little boutiques and craftsmen!  Right?  That’s when we’ll see the charming majesty of Marseille….or at least that’s what the travel book said……

Marseille was….Marseille.  I don’t know how else to put it.  The city was filthy and grungy, true.  The environment was less seething than seedy.  The buildings lacked the whimsical charm and ornate touches (like the wrought iron balconies I adore) which we had seen so much of in the other cities we had already been to in France.  It felt strange to walk down a slummy looking street where the stucco was crumbling off the walls of retailers like Hèrmes, Longchamp, and Louis Vuitton.   However, that said, there was still a certain filthy old school charm to the place.

The city is ancient, and the Gallo-Roman roots are evident in the architecture.  Strong buildings made of sandstone to withstand the winds off the water are still proud and tall, with a simple architecture that speaks to simple people living honestly the best way that they could.

In the inlets and harbor areas you can see evidence of buildings which used to be lighthouses and protection points, years (or centuries) previously, and were now either abandoned or used as municipal buildings. 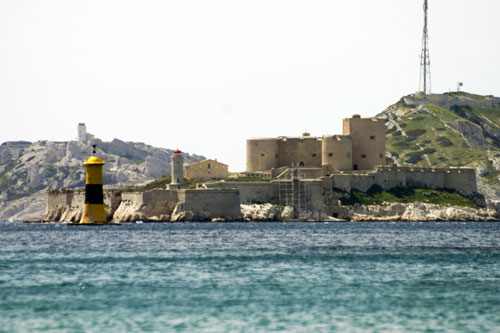 One of the most poignant and touching cathedrals that I’ve ever been in was set high atop the tallest hill in Marseille.  The basilica payed homage to the residents of Marseille, and the fisherman who worked long hours in an often dangerous and unpredictable environment.  Pictures of boats and ships were stacked up the walls, and later collages of airplanes were added to commemorate the many people from that area who had lost their lives during the war.  Hand carved wooden boats hung heavily down on long strings, swinging like a mobile in honor the many residents who made their living at sea. 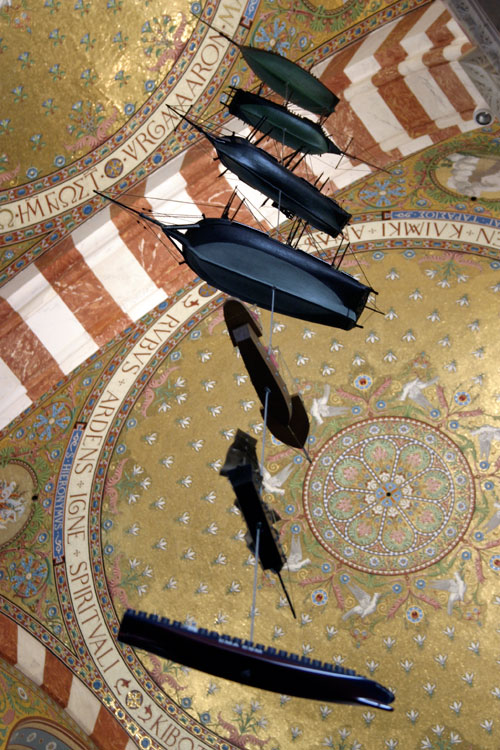 The markets were a pleasure as well.  In addition to the plethora of local merchants who set up shop along the port and the busier streets on a regular basis, there was a bustling central market which was…quite different than what I was expecting.  There were about 15 stalls selling fresh produce, fish, cheese or other comestibles, but the rest of the caravan (which stretched for almost a whole kilometer) was like a glorious fleamarket full of all the junk that you would expect (and want!) a fleamarket to have.  Or…maybe that is souk like.  I’ve, uh, never actually been to a souk….. 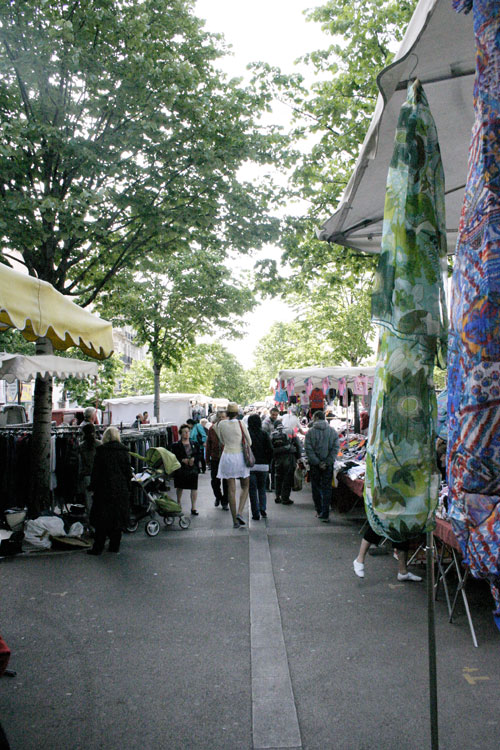 Oh, and then les plages!  There were pebbly beaches, rocky beaches, sandy beaches….there were a lot of beaches.  Mike and I spent one glorious afternoon just being absolute bums on the beach with our gas station beers, basking all afternoon until a storm slowly started to roll it’s way towards us. 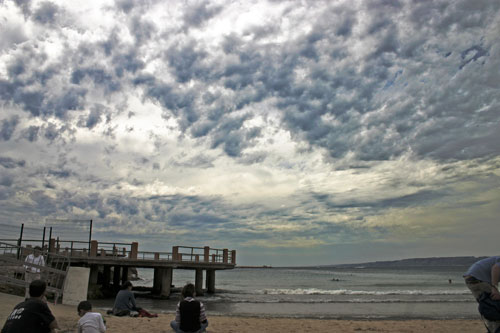 Walking back down towards the Vieux Port (the old port) hundreds of ships, boats and yachts bob and sway along the inlet. 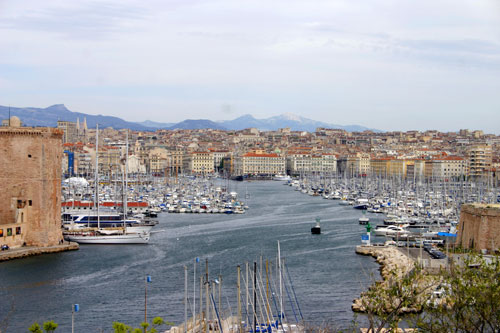 To say that the seafood is ‘fresh’ in Marseille is a bit of an understatement.  Fisherman would pull up to the port and unload the wares that they had pulled that day, emptying them into buckets and onto tables of shaved ice along the wharf.  They would clean and carve fish which were literally caught mere hours before. 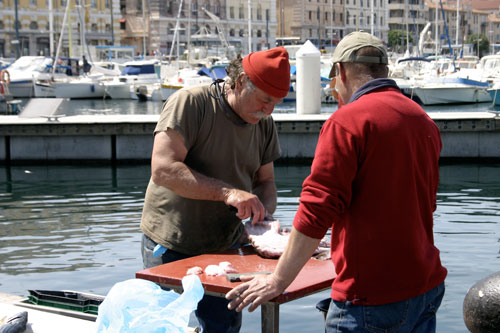 And speaking of fish, it’s about time that I started talking about the food, isn’t it?  Well, Marseille is famous for their fish and seafood, but they’re also, arguably, the most multicultural city in France.  Being a port for immigration and trade, the restaurants were a colorful cultural amalgamation, with fabulous traditional Moroccan, Indo-Pakistani, Middle Eastern and Mediterranean hot spots dotted through the streets.  Paella could be found on at least half of the Bistro menus, and it was certainly popular among the other diners that I would rubberneck as we walked by.  Unfortunately, when I finally got around to trying a local paella from one of the busier restaurants on the wharf, it was a sad disappointment.  Still, fresh langoustine is fresh langoustine…. 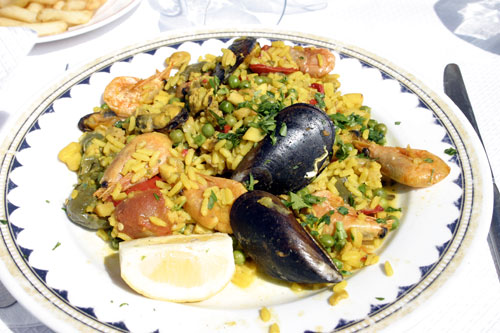 Another popular favorite is Moules Marinière, which are mussles in a light and briny broth seasoned with garlic and parsley. 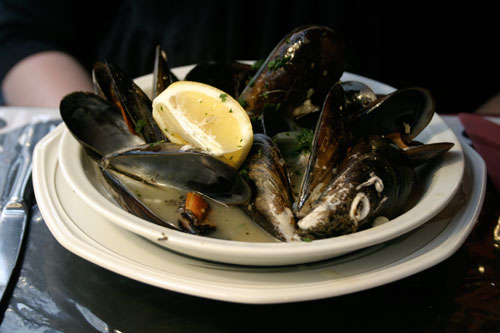 Oh, or Moules Frites….mussels with fries.  As you can see, I’m a bit of a mussel fan, which is rather fortuitous for visiting Marseille. 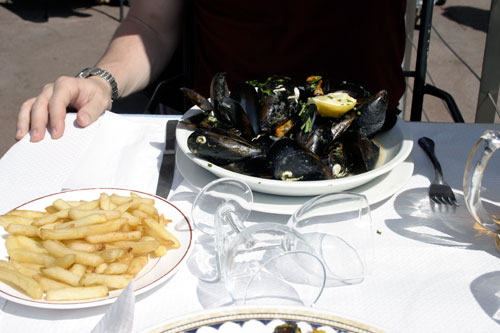 But these are just side notes to the distinct cuisine of Marseille.  You must be wondering why I haven’t spoken yet about the main attractions:  Bouillabaise and Aïoli!

Boillabaise might sound fancy, but it’s a simple, flavorful fish soup.  Traditional Bouillabaise has 5-7 types of fish along with an assortment of shellfish such as small rock crabs, langoustines and mussels.  The broth is colored and flavored with saffron, onion, garlic, and occasionally a strained tomato.  On the side of the Bouillabaise bowl is a plate with some stale toasted baguette slices, a clove of garlic (to rub onto the bread), rouille (or a pimenton flavored aioli), and sometimes a small dish of grated firm cheese.  After eating the fish and seafood from the broth, the baguette pieces are rubbed with garlic, a dollop of rouille goes on top, and then the cheese is sprinkled around the broth and the little bread rafts which float and soften on the remaining broth.  Simple, hearty, and yet utterly elegant all at the same time. 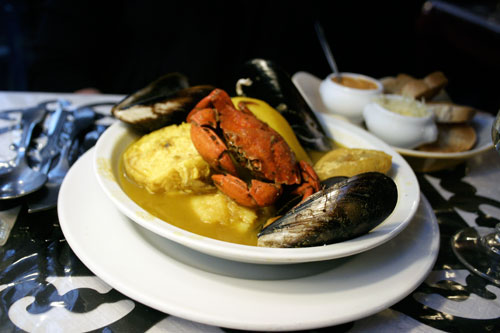 AÏoli is believed (by the natives of Marseille) to have originated there as well, and a popular plat is simply a portion of boiled or steamed fish with a boiled potato, some parbroiled or steamed vegetables, and occasionally a hardboiled egg.  On the side, of course, is a generous dish of  aÏoli for dipping the ingredients.  Again, the meal is simple but, well, honest.  There are no fussy flavors and no distractions – just fresh food prepared with minimal interference which allows each ingredient to taste the way that it was meant to. 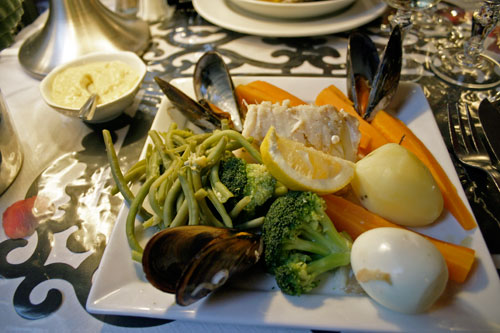 So that, in essence, was our experience of Marseille.  What a dichotic city it was.  One minute you would feel the weight of hundreds of years of history, and the next minute you would be sidetracked by a homeless man with a dog who was attempting to pee on your shoe.  The dog, that is.  Hopefully.  There were areas which would break your heart with their majesty, followed by regions where you would clutch your purse to your tummy, and wish you had invested in a money belt.  I really don’t know how to capture the essence of this multi-cultural and idiosyncratic city.  The best I can do is to say that Marseille is…well, Marseille. 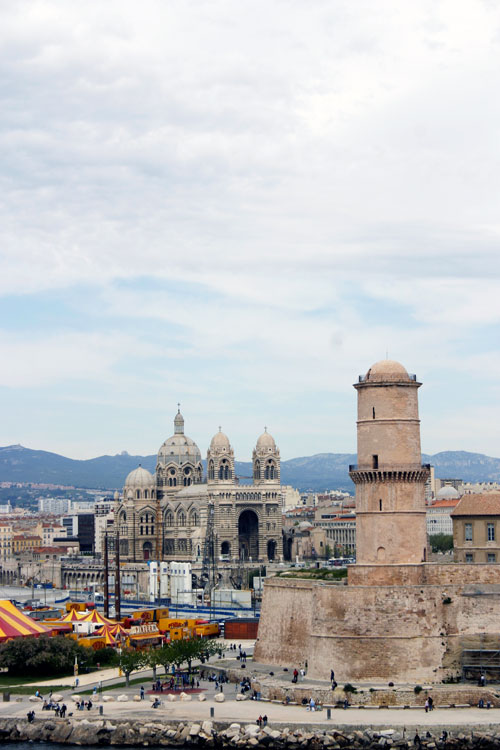 According to the European Union, Marseille has been singled out as the cultural epicenter of 2013.  I can’t help thinking that’s their way of saying, “Look, Marseille, enough is enough.  You could really have a good thing going on, but….well…get your act together.  And you have four more years to do it.  But, uh, in the mean time, be a dear and go pour me a bowl of that Bouillabaise you’ve got heating on the stove…”