Happy Memorial Day to all of our southerly friends in the United States!

Usually this part of the article is written by Tina, who is a wealth of fascinating information and insight, which provides a context almost as delicious as the food itself.  But unfortunately for her, she lives in a country where she has to get up early to go to work; doubly unfortunate, that “early” is a time of day when the sun isn’t even finished setting yet, let alone thinking about coming up again.

So in the interests of being a good, loyal partner and celebrating the holiday, I thought I’d pitch in and talk a bit about today’s recipe.  Happily Tina left me with a few talking points, so let’s see what all we need to cover here…

Look, I’ll level with you:  The only thing I know about Tunisia is that it’s where they filmed all those desert scenes in Star Wars, and at best that’s only going to factor peripherally into what kind of burgers you BBQ today.  In truth, it’s a mysterious process at best that lands me in a place where I get to choose between several sub-types of cuisine, while thinking that I’d agreed to something quite average.  Here’s what I’ve managed to narrow it down to, with pertinent examples:

Invariably, whenever I run through this gauntlet of non-decision points, I experience a glut of emotions:  disorientation from the undecided and fully-settled details, woven together like Joseph’s Technicolor Dreamcoat, but more accurately known as Tina’s Tarpaulin of Confusion; fear of my precious, conventional foods being thrust into some kind of strange international hybridization, as though somehow I owe the standard old burger my staunch emotional loyalty; and finally, relief that my confusion and anxiety are always enough to stun me into compliance, so that I got to enjoy an original take on a favorite.

It’s the routine weekend BBQs, the holiday get-togethers or just the sunny Saturdays, that are really our best opportunity to try fun twists like this one.  A familiar form and preparation, wrapped — literally — in a new package, it’s the kind of recipe that I look forward to (Tina) developing into a classic in its own right.

And now I’ll hand it back to Tina for the recipe.

* In my local grocery stores ground lamb is a bit…uh….on the pricey side.  Sometimes, because I AM a sneaky cheat, to cut down on the cost I make a mix of 1/2 ground lamb and 1/2 ground beef.  The burgers will still be juicy and flavorful but about $5 cheaper.  Call me a cheapskate if you like, but if I can reduce cost without sacrificing quality I’m absolutely willing to do it.

** There is a world of yoghurt available out there, so which is the best?  Well, it depends on what you’re using it for.  In savory applications and for a lot of my baking I prefer a tangy Balkan or Greek style yoghurt with active bacterial cultures.  Greek yoghurts tend to be a bit richer and creamier but I grew up eating my father’s tart and tangy homemade yoghurt so I often veer towards a Balkan style yoghurt.

Let’s start with the yoghurt sauce since that one has a bit more down time.  Line a medium sized mesh strainer with a double thickness of cheesecloth or a single layer of muslin (and yes, in moments of desperation I have also used a coffee filter and suffered no ill effects). Set it above a bowl which is large enough that the strainer is at least 2 inches away from hitting the bottom of the bowl.  Pour the yoghurt into the strainer and let it sit undisturbed for about 30-45 minutes.  As soon as the yoghurt goes into the strainer some liquid will start to leak out – this is a good thing!  Straining the yoghurt to remove some of that liquid will thicken it up enough that when you add the cucumber it will be more of  a sauce and less of a soup.

When the yoghurt is drained you can dump it into a medium sized mixing bowl.  Be sure to scrape off the cheesecloth with your spoon because a fair bit of yoghurt will still be sticking.  Use a garlic press or rasp to make short work of the garlic clove and add that to the yoghurt along with your tbsp of dried mint.

Coarsely grate the cucumber and use your hands to squeeze as much liquid as possible out of the cucumber before adding it to the yoghurt.

Give everything a good stir and season with salt to taste.  The sauce can be refrigerated until you’re ready to use it, and it will keep well in the fridge for a couple of days.

Now then, onto my favorite part:  the burgers! Slice the top off of your onion but leave the butt end intact.  ‘Butt end’, of course, being the technical term.  Peel the onion and grate it on the larger holes of your box grater.  Add the grated onion (removing the butt) to the lamb in a mixing bowl. 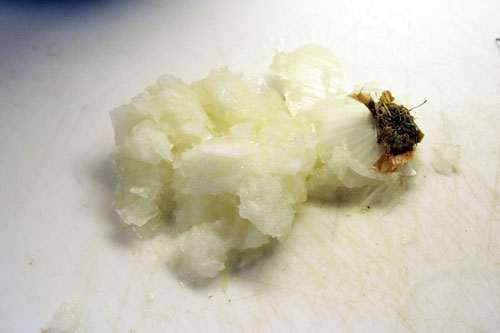 Finely mince the garlic and add this to the meat along with the tomato paste and spices.

Season the mixture with salt and pepper and knead it with your hands until it is well combined.

Separate the parsley leaves from the stems and chop it up very finely.  There should be about 1/3 cup loosely packed parsley when all is said and done. Add the parsley and raisins to the mixed mince and knead it again until they’re worked through and well incorporated.

Divide the meat into 6 equal balls and work the meat into large flat patties by pressing and turning the meat in your palm, sealing the edges with your thumb as you turn it.  Each patty should be about 6 inches in diameter.  Yes, that sounds enormous, I know, but remember that the patties will shrink as they cook.  Try to make sure that the patties are an equal thickness all the way across (as opposed to being fatter in the center) as this will help them to cook evenly.  Set the patties in your fridge to chill and firm up before they go on the BBQ.

BBQ the patties on a hot grill for about 5-6 minutes per side, or until they’re cooked through to your desired doneness.  When I’m trying to figure out if meat is cooked the way I like it, I usually go by the ‘feel’ test.  If it’s spongy and wobbly it’s probably rare, springy with a bit of give is medium, and fairly firm but not rock hard is well done – remember that the burgers will continue to cook for a few minutes while you’re resting them post-grill.  For these burgers, the raisins add a fair bit of juiciness which means that even when the burgers have a wee bit of spring they’re actually well done.  All of this to say, please don’t overcook your burgers.  All the delicious Middle Eastern spicing in the world won’t save a sorrowful looking desiccated briquette of lamb.

Serve the burgers on a folded pita or flat bread, topped with tomato, onion, parsley and a healthy dollop of that cool and garlicky cucumber mint yoghurt.

You know, if you’re going to have a BBQ and make your own homemade Tunisian lamb burgers with yoghurt sauce, it’s really not ALL that much work to also make your own flatbread…. I mean, sure, maybe they won’t be perfectly round like you’d get in the stores (case in point:  see below) but they’re flavorful, fresh, delicious, preservative free, and people will totally think you’re a star for doing it. Seriously.  Okay, just consider it, please?  I can also recommend a super easy fuss-free basic flatbread dough or pita recipe, if you like…..

We served our lamb burgers with a Middle Eastern chickpea, spinach and roasted red pepper salad, and a hearty helping of crunchy radish, onion and cucumber on the side.  Healthy, fresh and deliciously simple but with an exotic spice.  That’s just what we’re all about.